Contenders to replace Theresa May as Conservative leader have clashed over delivering Brexit during a TV debate.

The MPs argued over whether a new deal could be renegotiated with the EU, and the prospect of a no-deal Brexit.

Boris Johnson came under fire for not taking part in the Channel 4 debate but defended his stance, suggesting it would “be slightly cacophonous”.

His leadership bid has been backed by Health Secretary Matt Hancock, who dropped out of the race on Friday.

Some of the sharpest exchanges came over whether Parliament should be shut down – prorogued – in order to push through a no-deal Brexit by 31 October – something four of the five candidates argued against.

The UK had been due to leave the EU on 29 March, but EU leaders agreed to delay the date to October after MPs repeatedly rejected Theresa May’s Brexit deal.

However ex-Brexit Secretary Dominic Raab refused to rule it out, saying “every time one of these candidates take an option away… we weaken our chances of getting the best deal.”

No-deal Brexit? The candidates at the debate before a studio audience in east London also argued over whether a no-deal Brexit should be considered.

Mr Javid said no deal was the “last thing” he wanted, but added: “You do plan for no deal precisely because you want a deal.”

Mr Raab said Britain would be able to “manage those risks” associated with leaving the EU without a deal.

However, Mr Stewart said “I think a no-deal Brexit is a complete nonsense,” adding “it would be deeply damaging for our economy.”

The candidates were united in condemnation of the Labour leader with Foreign Secretary Jeremy Hunt accusing Jeremy Corbyn of being “against aspiration”.

Environment Secretary Michael Gove argued that he was the candidate Mr Corbyn would be most scared of facing at Prime Minister’s Questions.

In case you missed it:   Trump confirms calling off attacks against Iran (Video)

The UK’s next prime minister ‘Where’s Boris?’ Mr Johnson, the front-runner in the leadership race, was represented at the debate by an empty lectern. And Mr Hunt attacked his failure to appear.

“Where’s Boris?” he asked, adding “if his team won’t allow him out with five fairly friendly colleagues, how is he going to deal with 27 European countries?”

Mr Stewart also made a pointed dig at his absent colleague, saying he hoped “one of us” – referring to the MPs who had attended the debate – becomes prime minister.

Do Boris Johnson’s claims about his time as London mayor add up? Speaking to Radio 4’s World at One on Friday, Mr Johnson said he was “pretty bewildered” by claims he was dodging scrutiny and said the public had had “quite a lot of blue-on-blue action, frankly, over the last three years”.

He said the best time to take part was on Tuesday after the second ballot and would be at the BBC debate on Tuesday, hosted by Emily Maitlis.

Health Secretary Matt Hancock – who withdrew from the leadership race after the first ballot – has backed Mr Johnson “as the best candidate to unite the Conservative Party” as has Esther McVey, who was eliminated in the first round.

Writing in the Times, Mr Hancock said Mr Johnson had a “unique personality”, adding: “I have confidence Boris will be a One Nation prime minister because that’s how he ran London – consistently – for eight years.”

While Mr Johnson remained the frontrunner, Mr Gove said “we need to make sure he is tested” and he believed he could make it to the final two as a “strong alternative” who was equipped to “be prime minister from day one”.

Health Secretary Matt Hancock – who withdrew from the leadership race after the first ballot – has backed Mr Johnson “as the best candidate to unite the Conservative Party” as has Esther McVey, who was eliminated in the first round.

In case you missed it:   Petrol and diesel to cost more in March

The TV debate also saw politicians being asked about their priorities apart from Brexit. Mr Javid chose funding education and further education colleges, saying: “We have cut back too much in that space.”

Mr Raab said he wanted to improve state schools and offer more choices for young apprenticeships, while Mr Gove said children would be his top priority and emphasised the importance of protecting the environment for the future.

Mr Hunt told the audience “every Conservative has two desires: cut taxes and spend more on public services.” He also said he would focus on literacy and the social care system.

Mr Stewart said his central priority would be fixing adult social care, describing the issue as “the great unfinished revolution”.

Biggest weakness? Asked about their weaknesses, Mr Gove said he was impatient, while Mr Raab said he was “a restless soul” who “always wanted to make things better”.

Mr Javid admitted to being stubborn while Mr Stewart said there were “many things he didn’t know about the world”. However, he added that “we need leaders who listen” and criticised “macho posturing”.

Mr Hunt joked that his biggest weakness was “getting my wife’s nationality wrong” – but on a more serious note, said in his battle with junior doctors as health secretary, he could have been “better at communicating” what he was trying to do.

The candidates will now go on to take part in further ballots until only two remain. The final pair will be put to a vote of the 160,000 members of the Conservative Party from 22 June. The winner is expected to be announced about four weeks later. 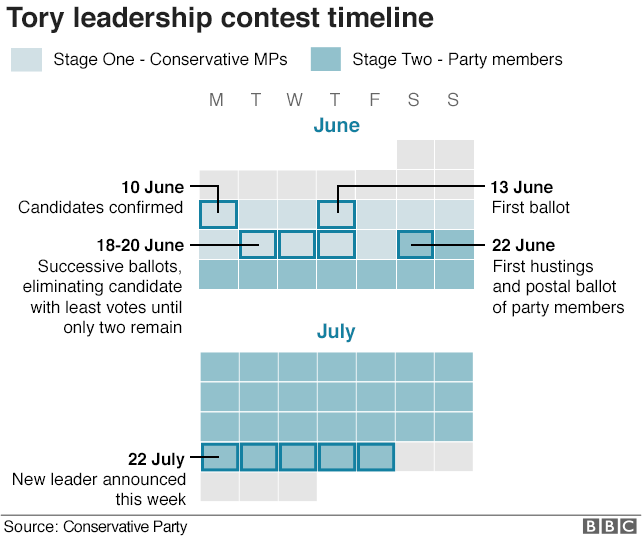 Junk food can increase risks of allergy in children

Why Japanese Women Don’t Get Fat or Old?